It's like eating the inside of an Almond Joy, but with an actual coconut texture and not the weird paste-like consistency. This is delicious. Would eat again. Deja poop score: 0 (no relation) 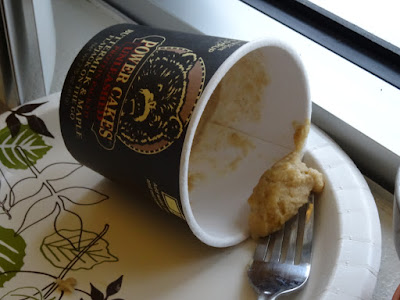 Calling this a flapjack is weird. I'm also confused by the name: POWER CAKES UNLEASHED. I've never seen a cake in bondage. But then, I'm not sure I've ever seen a POWER CAKE in the wild either. Maybe they're just so badass they must be kept in captivity.

Which leads me to wonder: Where is the POWER CAKE zoo?

Anyway. Flapjack. Pancake. It's neither of these things, but the name is misleading enough that I ate it with a fork instead of a spoon. It's more like thick pancake batter. You add hot water to the powder and stir to get something with the texture of pureed oatmeal. (Because I did it wrong. Update at bottom.)

Is this what Cream of Wheat is like? Never had the stuff.

If you don't mind the smooth texture (I don't), this actually tastes great. It's got hints of sweet from the "maple flakes" (which I assume are dehydrated maple syrup) and brown sugar, so that portion of its marketing is legit. It's a decent breakfast.

These gummies aren't a typical Dirty Hippie Snack because they make no claims about being healthy or any such thing. It's just a stoner snack. It contains red 40, corn syrup, and pretty much everything else typical Dirty Hippies hate. My wife's store won't carry marijuana-related edibles to begin with (these are indeed legal), but even if they did, the total lack of health-anything in it means you'll never see it in her store.

But not all stoners are hippies, and stoners will consume anything that even looks like a pot leaf.  I looked up CBD (which this thing is "100% infused" with, though it's not clear what the 100% refers to). That's cannabidiol, which Wikipedia says no psychoactive effects.

Seeing that, I figured when the package said it "may cause drowsiness" and "do not exceed 1-2 per hour," (apparently they don't know what "do not exceed" means) it was just hype and bullshit meant to sell expensive candy t…
Read more

One of my co-workers is Korean. To show gratitude for some projects I helped her with, she got me some Korean snacks. These are shrimp crackers, which are apparently a popular salty treat. I dug in.

Upon opening the bag, a wave of fishy ocean scent hit my nose. I was afraid. I knew that smell. You might know it too.

Its texture is remarkably similar to Cheetos, with a taste that's somehow reminiscent of plain Pringles (or, in marketing-speak, "Original Flavor"), even though they're wheat snacks, not potato.

The ingredients list also features ground shrimp, which is news to me. I thought they lived in the water.

But the actual flavor is really mild... right up until you burp. Then the fish-market smell burbles out of your gut like steam from a boiling chum bucket.

Sorry, it's not really gross at all. I just couldn't resist the visual. At most it's a bit unusual, but if you're a fan of seafood it's probably an irrisistible snack.