Showing posts from 2015
Show all

In this case, "tastes much better than it looks" is impossibly hopeless. Also: it doesn't taste good. Deja poop score: Flawless victory (10 out of 10). Product info: http://www.gopalshealthfoods.com/product/original-brownie/
Post a Comment
Read more 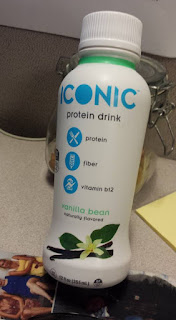 Dirty hippies talk about not understanding the names on some product labels. I don't understand what makes this drink "iconic." Or what 20 grams of "grass fed Protein plus Fiber" means. Is there meat in here? Why are protein and fiber capitalized? Oh, I see. "Grass fed milk protein" is written elsewhere on the bottle. Which begs the question, how do you feed milk? The vanilla flavor is fine. It's thin like water and leaves a texture in my mouth. Tolerable drink for free. Would not buy. Product info: http://drinkiconic.com/
Post a Comment
Read more

I don't know what a "health warrior" would do with a hard almond rectangle except attempt to bludgeon her enemies with it. Ingredients include an "Ancient Grain Blend (chia, oats, organic quinoa)" which is as good at tripping the Marketing Bullshit Meter as it is at getting stuck in your teeth. Maybe your teeth are better than mine. The flavor is inoffensive, but contains no joy. Keep gnawing on that misery brick, hippie health warrior. Deja poop score: 4 plops out of 5. Product info: http://www.healthwarrior.com/products/honey-almond/ Same story as above, except this one actually tastes alright. Dark chocolate and coconut makes a good combo. Would eat again. Deja poop score: 8 plops out of 10 (still looks like a turd). Product info: http://www.healthwarrior.com/products/dark-chocolate-coconut-sea-salt/
Post a Comment
Read more

I don't know what it means to be "double certified organic," but it sounds like at least single-dose bullshit. Never mind the size ("organic" produce--it's all still carbon based, so the term is dubious to begin with--is usually smaller than other produce) but these soft green seeds look nothing like what I expected or what they display on the package. It also doesn't have the crunch of roasted pumpkin seeds as I know them. The taste is alright, similar to dried peas or sunflower seeds I think, but the spicy flavoring is very unevenly applied. Each bite varies between very spicy and not at all. I was looking for a snack tonight and am eating a packet of Aldi brand trail mix instead. Product info: http://www.edenfoods.com/store/spicy-pumpkin-seeds-tamari-dry-roasted-organic.html
Post a Comment
Read more

Peeled Snacks Much Ado About Mango

It tastes like ripe mango, which is hard to find in US grocery stores. It chews somewhere between beef jerky and fruit leather. It's delicious. Deja poop score: 4 out of 10: Scrape baby turds into flat pieces and dry them. Product info: http://peeledsnacks.com/snack/much-ado-about-mango/
Post a Comment
Read more

Dirty Hippie Snacks: Protein/Breakfast/Meal Powder/Shake Mix Edition. There are a lot of these and they're very similar, so I'll keep it simple. I'm sampling a variety to choose a winning easy breakfast, so these will also get an accept/reject rating. The vanilla chai flavor is fine, totally drinkable. Very grainy texture though. Reject. The mixture does kind of look like diarrhea. Product info is somewhere in here: http://www.bluebonnetnutrition.com/products
Post a Comment
Read more

It's a vegan cookie, but it's still a cookie. A large one. This sucker packs 440 calories into you if you eat the whole thing. Tastes good, though. I'm personally not crazy about soft cookies, but I like the bite of ginger in it. Pairs well with coffee, maybe better with chai. That ginger flavor makes what would be a rich, heavy treat into something that at least tastes lighter. Deja Poop Score: 3/10.
Post a Comment
Read more

This looks like a bar of epoxy that you'd use to patch leaky pipes. The color is so uniform and the texture so smooth, it's a little unnerving. It bears the marks of the machine that spits it out, which I don't mind. Reminds you from where it came. Terrible bite. It feels like chewing on a bar of epoxy putty, and probably uses a similar process to make. There's soft resistance, then it pulls away and becomes mush, then grainy. It's better if you crumble bits off by hand. The flavor is ok, albeit fairly singular. Lemon and cashew is not a combination I would've expected, but it works. Nutty and lemony, but not salty or tart. Update: Trying this a second time almost a year later and it also tastes like epoxy. Would not eat again. Deja Poop Score: 7/10. Product info: https://risebar.com/shop/protein-bars/lemon-cashew-protein-bars/
Post a Comment
Read more

A colleague gave me a couple of these Macaw Bars to try. You can order custom flavors on the company's website, but this I think is one of their regular ones: "coconut husk." It's more dry and crumbly than most other bars. I understand most hippie bar makers use date paste to get the stuff to stick together. This one doesn't do that, so the flavors of the individual ingredients really pop (at the expense of it kind of falling apart in your hands). No compliments on the looks, but it is delicious. It doesn't taste like it's trying to hide flax or other typical dirty hippie flavors. Deja Poop Score: 9/10. Product info: http://www.raawmacaw.com/coconut-husk-energy-bars
Post a Comment
Read more 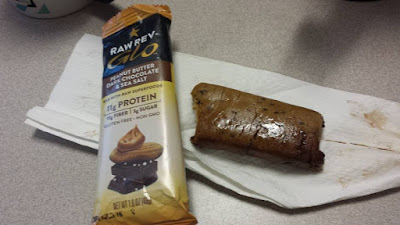 A slick, shiny turd came out of this package, but I guess I shouldn't be surprised. There's a turd-shaped dollop of peanut butter depicted on the wrapper, warning you of what's inside.  Once I got over the initial visual revulsion, it actually tasted good. The texture is slightly grainy/sandy in the way that most peanut butter based bars are, but it's hard to go wrong with PB & chocolate. Deja Poop Score: 9/10. Squeeze this turd between your fingers at: http://www.rawrev.com/#!raw-rev-glo-peanut-butter-dark-chocolate/c30t
Post a Comment
Read more 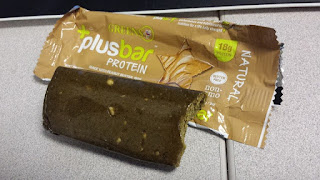 The color of pressed baby shit, the flavor of dry dog food. Seriously, I ate dog food once as a kid. A lot of it. That memory came rushing back when I took a bite. Product info: http://www.greensplus.com/plusbar-protein-natural/
Post a Comment
Read more
More posts